Last August, I had the following conversation with Alex, across 5 different communication channels, and over a couple of weeks. Counting this blog post and the time that had further elapsed since conversation began, that’s 6 channels, and as many months. 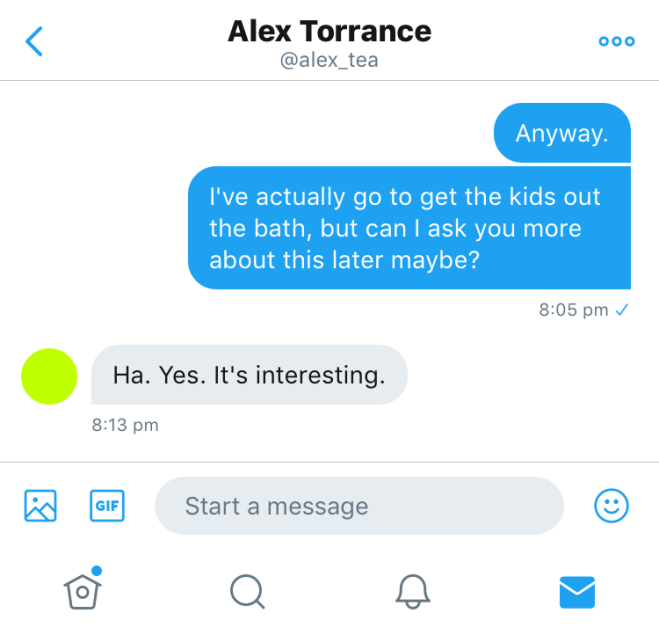 7:37 pm – 13 August 2017
MW: Sorry to interrupt! It’s nothing important, more just a musing on something and figured Sunday evening might not be the time and place!

7.40 pm – 13 August 2017
MW: Cool. Don’t let me take you away from Ella’s attention though. I was just looking for a reference you made this weekend and couldn’t find it in various channels of communication.

7.40 pm – 13 August 2017
MW: Got me to thinking about writing and about talking about things, in mixed and muddled channels. Time to humour me?

MW: Cool! So this is kind of my point.
MW: Conversations / personal communication happening or carrying on across multiple Channels.
MW: Just wondered if we (users) should have better compartmentalisation of channels, for people, subjects, and levels of severity and importance.
MW: ?

AT: Who would be responsible for making those decisions?
AT: I think that should be left up to the user
AT: But it’s hard and messy

AT: Different levels of immediacy and severity.
AT: E.g. Text is immediate and v personal

AT: Yeah. I don’t use it for work, only give my number to trusted people.
AT: Slack/IM is immediate but ephemeral.
AT: Email for me is asynchronous but lasting.

MW: We have all these categories though, even though they’re never discussed.
MW: Agree with all that you’ve stated.

AT: And it’s up for everyone to work out this for themselves

MW: And so what about in here?

AT: Ha! So I v rarely use this

MW: I’ve found myself chatting with some old friends in here.
MW: Never you and I though.
MW: And usually contextual around an image I suppose. Or an event that’s shared.

AT: Yeah
AT: I wouldn’t expect to get a message asking me about work here

AT: But then, if I used it as a portfolio or brochure then maybe

MW: Wonder what you’d think if I did?

AT: Sometimes I think it would be good if you could opt out of messaging on some platforms

13 August – 7.57 pm
MW: Back to channels you and I do use then.
MW: What’s the difference in here between this and text or twitter DM?
MW: I’m using this more for non-iOS friends.

7.58 pm
AT: I’d say this and text are almost identical
AT: I have a lot of group chats with non iOS people on here

7.58 pm
MW: This feels better for random groups as well.

8.00 pm
MW: Lots of parent and neighbour stuff happens in here for me.
MW: Are there any services you know that pull every channel together?
MW: Just for a log?
MW: IFTT style.

8.00 pm
AT: Didn’t Microsoft mobile os try and do that

8.01 pm
AT: Guess it would be difficult because lots of channels are encrypted these days
AT: Also would be super noisy
AT: And isn’t that basically what phone notifications are?

8.03 pm
AT: SMS/iMessage for brevity and integration with laptop

8.03 pm
MW: Doesn’t work for me though
MW: (Notifications that is).
MW: I do love more mobile to Mac sync though. Set up WhatsApp that way now. Loads more useful.

So, it seems that we agree on different chat channels have different levels of importance and intimacy, and that we’re in line with how we define those, despite having never discussed it (or read someone else’s instruction).

What are your feelings about Slack though? Do you use it professionally and personally? How many channels and groups do you belong to? And, do you ever find yourself mixing a thread via email and Slack with a colleague?

Also, did the number of questions I listed there make your heart sink a bit, in that classic ‘emails are way more intensive and demanding than chat’ fashion? :)

Oh – one more – do you feel that it’s rude or abrupt in email, if someone doesn’t address and sign off in some sort of formal fashion?

PS. I can’t bring myself to use emoji in email. Feels too contrived with it not being a simple part of the writing interface.

MW: Hey again. Been thinking more about chat last night, and I’d quite like to post the conversation history if OK with you?
MW: It’s reminding me of a few old ideas that I’ll like to follow up after it.

AT: Yeah, of course.
AT: Wish I had been more erudite now!

MW: Ha! Wouldn’t have been as good if we were planning that. I”n fact, that’s another good point. How we talk when we know who can see what records will be left.
MW: Anyway, for further channel mixing, I’ve sent you an email as well!

AT: I saw your email last night, but didn’t get home until late.

MW: No rush. And again, a good point to note that email really does slow things down and make things harder for people.
MW: That said, I still have a soft spot for it.

From: Alex Torrance
To: Mathew Wilson
Subject: Re: Picking back up, post bath time!

So I am really bad at email and let this slide.

What are your feelings about Slack though? Do you use it professionally and personally?

I like Slack, but it has it’s downsides. I use it professionally and personally.

How many channels and groups do you belong to?

At work I’m in 2 Slack teams, one for internal GDS stuff and one for cross government stuff. The internal one gets used for work stuff and also general chat. It’s good as it’s like a message board where you can communicate with people you might not know personally. There were recently some consternation about the official status of it as we have to be transparent so we’ve had some rules put down about it’s usage (no private channels, descriptive channel names, for example).

There are so many messages that nothing ever lasts for more than a day or two, so that can be quite frustrating.

In the cross gov slack I’m in a lot less channels. Just the main chat one (which you can’t leave) and #design.

I’m also in some personal ones. One is a spin off from a music mailing list I’m on, and is just a much less formal, more lightweight chat, and then there’s one for DDD but no one ever posts on it, so it’s a ghost town (I might be the only person logged in).

And, do you ever find yourself mixing a thread via email and Slack with a colleague?

I did that today actually. From Twitter (my message about tagging interfaces) to Slack. Because of the ephemerality of the messages on slack things will often move from Slack to email or Google chat

Also, did the number of questions I listed there make your heart sink a bit, in that classic ‘emails are way more intensive and demanding than chat’ fashion? :)

Haha, I’ll let the week and a bit response time speak for itself. I feel obliged to spend more time on my responses, and that adds pressure that I naturally avoid, so I put off replying until I “have time”.

Oh – one more – do you feel that it’s rude or abrupt in email, if someone doesn’t address and sign off in some sort of formal fashion?

I think if you’re in a chain of emails, they’re not needed after the first. Often a simple “thanks” or “speak soon” will do for me.

PS. I can’t bring myself to use emoji in email. Feels too contrived with it not being a simple part of the writing interface.

I’ve wondered for a while about how muddled I get across different communication channels, and I’m not exactly sure when it started.

Early 2000s was easy, with just email and actually short SMS. Even up to early iPhone days and up into late 2000s things seemed more simple, with Twitter, Facebook and a few other channels becoming commonplace, but it was still cognitively clear ‘where’ thoughts and conversations were held.

But in the last 5 years or so, things have gotten muddier. I frequently forget on which channel or platform – or which sub-channel within which platform – I’ll find the reference I’m looking for.

Was it an Instagram comment, or Instagram DM? A Tweet, or a reply, or a retweet, or Twitter DM? A green SMS or blue one? WhatsApp DM or group? Slack DM or channel? Add to these, the possibility of LinkedIn, shared Apple Photos, YouTube, Strava, Google Keep or WordPress comments. And this is just for me, a nonuser of Facebook or Snapchat or anything much else (that I can remember as I write).

Worse still for me, I’m finding that this saturation of conversation channels is interrupting with my own internal dialogue and thought process. Was that an SMS, or did I think it!? Did I retweet that, or did someone else? Did I save or bookmark that reference, or just like that comment with intent to review my likes at a later date?

Ultimately, any issues here are with myself, and my own ability to manage my channels and how I interact on them. Yes, they’re saturated and there are more platforms for communication than humanity really needs, but the responsibility for how we act across them is ours.

In conclusion, this exercise with Alex has made me realise my own problem with these channels, beyond my intrigue in how we all manage and treat them (as above, with shared perceptions of SMS being personal and not a platform for work, or even work people), without ever really being told, or having to discuss and define as we did.

That said, there was something nice about having the conversation and clarifying with Alex how we feel about our shared channels. My social contract with him is now oddly more comfortable, knowing that we’re in each others welcomed SMS circles, and that we’re both tardy with personal email replies… a point which I’m worse on however as since August when Alex last replied, I’ve actually not managed to continue the conversation. Until now. I wonder where it goes next?