Found on LinkedIn, Googled, discovered on Signal v. Noise, linked to segura-inc.com, the celebrated (at the above sources) terms are interesting. 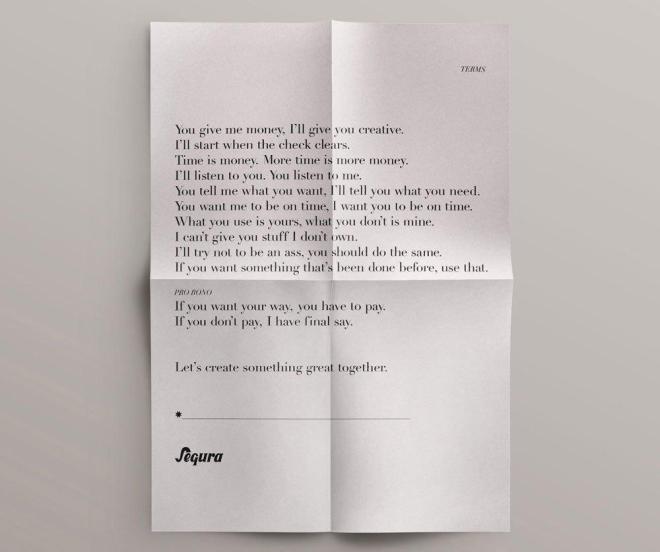 You give me money, I’ll give you creative.
I’ll start when the check clears.
Time is money. More time is more money.
I’ll listen to you. You listen to me.
You tell me what you want, I’ll tell you what you need.
You want me to be on time, I want you to be on time.
What you use is yours, what you don’t is mine.
I can’t give you stuff I don’t own.
I’ll try not to be an ass, you should do the same.
If you want something that’s been done before, use that.
PRO BONO
If you want your way, you have to pay.
If you don’t pay, I have final say. > Let’s create something great together.

Part of me really likes it. It’s clear, understandable, and much more open than regular terms, which feel designed to obfuscate and cause more issues (and cost) than they prevent or resolve.

Another part of me finds it really facetious, almost vulgar, and verging on combative more than extra communicative. The first three lines being about money, the fifth, suggesting infallibility in the part of the contractor and thereafter, it just comes across as accusatory and defensive, more like a frustrated checklist of what has previously gone wrong for this designer, rather than a piece of communication meant for commencing a secure and positive relationship.

Like someone starting a sentence with “Now, I don’t want to come across as nasty or bitter or anything, but…”. Too late. job done. Don’t think of a pink elephant.

The idea then, really nice, the execution, perhaps they just need a hug?