Involvement with the Kingston Graphic Design students nudged my lapsed enjoyment of viewing final year graduate shows this summer, and reminded me of my fascination with graduate show business cards.

I say fascination, but it’s more of a philosophical intrigue I suppose, in that those 3 or 4 years of study, for thousands of visual and creative students, tend to boil down to a single piece of 85mm by 55mm graphic design.

This intrigue in 2008 – at what seemed to me like the height of theFreeRange mass-grad-show phenomenon – led me to collect as many cards as I could, for a sort of super-distilled-grad show, on Flickr, rather than Brick Lane.

In total I seem only to have managed about 119 cards, but then not everyone made them, remarkably, and I disqualified anyone who made something larger than business card size (deciding that if it doesn’t fit easily in a wallet, that the design fails). Also, it was pretty exhausting walking around every show, and embarrassing to do so while just collecting cards, like a unambitious kleptomaniac.

Looking back now, nearly 10 years later, I wonder how successful some of these cards were? How many of their designers are still on the same path as their cards promoted?

With these memories in mind while having a wallet cleanse this morning, I found the 5 cards that I kept from the Kingston and Goldsmiths shows, and deciding I should do more than leave them in there, or post them quietly to Flickr, I thought I would review why I picked them up. 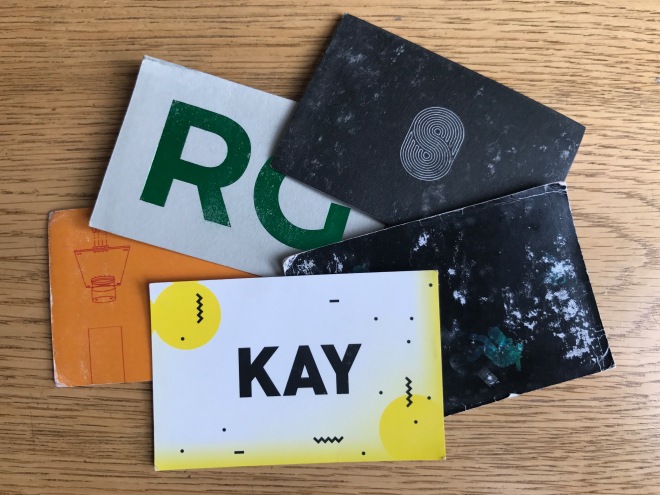 Won-Kyung (Kay) Hwang. won-kyung.com. Forgiving the broken website (at time of writing), this student not only had a great pitch (stall? plot? stand?) and incredibly handsome graphic design work, but she was giving away skin colour chocolate from one of her projects. A grad that can make things look good AND taste good will surely go a long way! Seriously though, her work was really impressive and polished.

Isobel Jones. isobeljones-d.wixsite.com/isobeljones. OK, perhaps this card displays a flaw in my theory that the final show card is important (as a reminder and key to contact and find out more), because I cannot for the life of me remember from this site and work what prompted me to pick up the card. Possibly it was an interactive piece of work that I wanted to find out more about. Alas.

Tasreen Rahman. tasreenrahman.co.uk/xyz-2017. Again, it proved difficult at first to see why I picked this card, but digging into the work I remembered that this X-Y-Z (2017-) comic project seemed interesting and as though the student had a good sense about UX and interaction. Based on the website however I wonder… Oh, and based on her claiming to do “All-encompassing-inter-disciplinary-unorthodox-playful-can’t-really-be-categorised kind of design” I wonder even more. The term “narrative enthusiast” however rekindles my hope that she’ll refine her practice and evolve a more accessible angle to her work.

Joshua Spencer. jspencer.uk. Now, this card and work I remember well, and viewing his website makes me even more confident that Joshua is one to watch. The Flat pack revolt project that he presented was phenomenal and easily the most polished, thoughtful and professional pieces of work that I saw at the shows. Read the project, view the rest of his work, and if you’re looking for a talented designer, drop him a line. Or, like me, keep tabs on him and maybe we’ll all get a job working for him one day!

Ruth Gardiner. ruthgardiner.com. Without wanting to single out ‘my favourites’ from Kingston – as clearly all my students were awesome :) – I grabbed Ruth’s card I think because it was shiny! Also because I wanted to see how she presented herself online, and read more about her Londependence project which I enjoyed greatly as it developed.

Dear visual / design students. Don’t use Wixx or Weebly for your portfolio websites. They’re not bad systems but they’re never going to display your work as well as Squarespace. Or use Shopify if you need a shop. Or WordPress.com (Note: that’s WP dot com which is hosted) if you need a blog. And only ever make your own site or go beyond the templates of the above three services if you’re planning to go into website development. If not, then just publish your work in the most clear and accessible ways possible.