I wrote about the McMansion back in August, prompted by what I thought was an over the top and arrogant diss about an unconventional style of architecture. While I still don’t like the style, I still also think that there’s something off about the way that the establishment talks about it. Another case in point is the 18 October edition of 99% Invisible titled McMansion Hell: The Devil is in the Details.

Much of the moaning comes from Kate Wagner, creator of the blog of the same name, who doesn’t pull punches when expressing her feeling about the McMansion:

It doesn’t react with the environment around it… Built cheaply with cheap materials, new materials… rarely ever traditional materials… They’re built without any sort of consideration for the grammar of design…

Thereafter she pretty much reiterates these points, to seemingly punctuate the fact that she loathes anyone that doesn’t abide to the established rules of academically and articulately prescribed ‘good design’:

There’s no real architecture in the McMansion, and it’s too ostentatious to be considered folk architecture. They have no architectural commentary. All they do is represent an ideal of wealth. it’s very much meant to convey that one message, that: I have a lot of money and a lot of space, and I am putting it in the house that is so tall and massive that you feel intimidated by it, just as you should feel intimidated by my apparent wealth… Who cares if you have a big house if it’s, like, so ugly I don’t want to look at it?

Again, I don’t like these buildings either, but there are two ways in which the utter dismissal within this commentary feels wrong, if not ignorant and naive.

Firstly, every new art and design movement ever, has been hated and written off by the old school establishment at first. Two random similes that sprung to mind as I listened were Tower Bridge, and the TV show Frasier. Stick with me…

Tower Bridge is today celebrated as a beautiful and classic landmark. An icon that respected historian and TV presenter Dan Cruickshank thinks is “utterly amazing 1”. But are you aware that the ancient looking stone castle crossing the Thames isn’t actually very old, nor actually ‘made’ of stone? Construction was completed a little over 100 years ago, and the entire structural and practical part of the bridge is made of steel. The stone is simply granite cladding for making it look nice. Think pebble dashing, or wallpaper that looks like old red bricks, or wood effect laminate roll flooring. So while it may look good to us now, at the time it received some seriously harsh criticism:

Architect and author Henry Heathcote Statham, writing in 1916, was quoted as saying: ‘It represents the vice of tawdriness and pretentiousness, and of falsification of the actual facts of the structure.’ The artist Frank Brangwyn also commented: ‘A more absurd structure than the Tower Bridge was never thrown across a strategic river.’ 2

“Tawdriness and pretentiousness, and of falsification of the actual facts of the structure.” A familiar sounding critique. And speaking of pretentiousness…

In Frasier, the main character and his brother were effectively snobs. Their lives were about good taste and the best of everything, though not simply or vulgarly from a cost perspective, but rather from and established and celebrated angle. Frasier’s apartment was the physical manifestation of this, and its ‘eclectic style’ was widely applauded outside of the fiction.

I myself, developed a love of Eames, Marcel Breuer and open plan living through watching the show. But looking back at the eclecticism now, it could easily be the interior of a McMansion. And doesn’t the statement “I have a lot of money and a lot of space, and I am putting it in the house that is so tall and massive that you feel intimidated by it, just as you should feel intimidated by my apparent wealth…” apply just as equally to Frasier and anyone that owns a large space that is deemed to be well designed? In fact, I wonder if McMansions are a product of the show in some way. The idea that you can just gather all the things and features you like into one place and call it good design.

But is that what McMansion owners and designers do? Really believe that their houses are ‘good design’? Or is it less a case of what they (or we) think, and more simply about what they like and want? Which takes me to my second point: How far does our remit as designers go, in saying what is good design, when there can be so many people in agreement about liking something that we don’t.

‘Who cares if you say it’s not good design if it’s, like, so not what I want, that I don’t want to live in it?’. Think of those Tower Bridge critics and aesthetics experts, telling people of the time that the bridge that they liked was bad, and not to be liked. This is not to say that they were wrong outright, nor that Kate or any trained designer is simply wrong, just that there is more to design than what becomes established and agreed on by the industry. What was deemed good from the past, and agreed on today, does not always dictate what will evolve in the future. Another case for me is the Memphis movement. I hated it and still do. So did others at the time. It existed to break rules and cause a reaction. Less ostentatious and more just petulant. But there it is, a part of design history, collected, celebrated and studied. 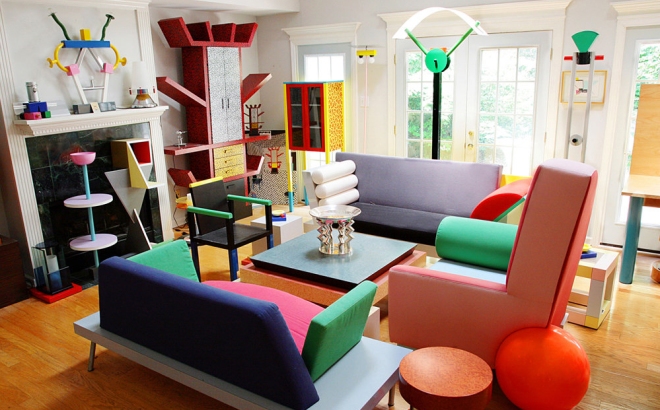 I wager then that The McMansion will evolve and that in time it will be seen as a valid architectural movement. No, not folk architecture, but something new. A vulgar aesthetic, or ostentatious-ism, or maybe McMansion will just stick. Whatever it’s called, it will be recognised as a valid period in time, when people had so much money and so little restraint, that they were able to design houses like they would choose a bag of pick n’mix.

In the podcast they even acknowledge how this is happening and they explain why, but they’re so busy slagging it off that they seem to miss the fact that some of their socio-economic observations are validating the movement as a consistent product of our time. More than something a few people are doing ‘wrong’ for no apparent reason. Kate explains:

People started designing their houses with the notion of selling them in mind. Realtors would advise ‘oh I wouldn’t buy or do this, because the house isn’t going to sell well. So, we’ve sort of devised this culture where we’ve thought about selling our houses before we’d even spent one night in them… Houses and styles didn’t evolve through a planning committee, they evolved through a combination of popular taste and place… it’s one of those things that gives you a context of where you are…

Like these observations or not, it’s hard not to hear them and realise that they validate the existence of the McMansion as an architectural movement. In this sense, I think mcmansionhell.com is an unwitting historical archive and likely to help the movement more than it will damage it. Sure, some of us will read it and laugh and cringe, but McMansions will keep getting built, torn down, and rebuilt, and in just over 100 years, maybe even celebrated.